A large proportion of people who are referred to memory clinics are cognitively healthy and do not receive a diagnosis of dementia or another cognitive deficit. This places unnecessary strain on stretched services locally, nationally and internationally.

A team at the University of Exeter led by Dr David Llewellyn, have developed a clinical decision support system called DECODE to triage patients being referred into the memory clinic.

If used as a triage system, DECODE has the potential to reduce waiting lists, reduce the cost per diagnosis, and prevent unnecessary distress in cognitively healthy patients who can be reassured at a much earlier stage.

This PenCHORD project modelled the anticipated impact using DECODE would have on patient waiting times for assessment.

Using modelling techniques, the project aimed to provide evidence of the impact the DECODE system would have on waiting times at the three Devon Memory Clinic’s, to help determine whether it would be beneficial to implement DECODE.
To achieve this objective, the project aimed to:

Across all three of the memory clinics the simulations demonstrated that the DECODE triage system would reduce waiting times at the clinics to zero. The amount of time that this would take varied depending on the current size of the clinic waiting list and the weekly number of assessment slots that the clinic was able to provide. 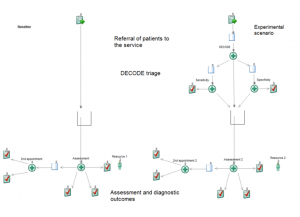 In North Devon where they had the smallest waiting list it took between 37 and 46 working days to clear the waiting list. In Exeter it took between 142 and 187 working days and in South Devon between 226 and 292 consecutive days. The number of days taken to clear the queue was dependent on the sensitivity of the triage system and the accompanying figure is an example of one simulated scenario and the associated changes in waiting times for all three memory clinics.

There was a refractory period in the memory clinic systems where waiting times continued to increase between 35 days in North Devon up to 105 days in South Devon. This was due to the inappropriate referrals already in the system. The modelling was also able to estimate resource utilisation and false negative rates. False negative rates never exceeded 3.5% of patients and resource utilisation was reduced by between 20 and 45%.

The findings from this project have been used to inform Devon Partnership Trust of the expected impact of implementing DECODE across their memory clinics. There is enthusiasm for the potential impact of DECODE which was studied and communicated through the modelling undertaken by PenCHORD. Further work is being undertaken to understand how best to implement DECODE and an implementation study is being planned.