Two researchers at the University of Exeter have pedalled a whopping 460 km from London to Paris, raising thousands of pounds for Alzheimer’s Society in a gruelling four-day challenge.

Drs Mark Tarrant and David Llewellyn have exceeded their £1,550 fundraising target for the Society, raising over £2,000 so far to boost the Society’s ground-breaking dementia research. Donations can still be made on their JustGiving page. 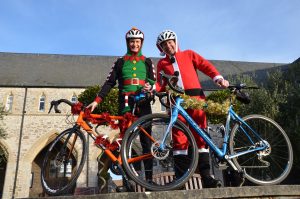 Throughout the journey the dedicated duo battled sweltering heat, with temperatures soaring to almost 40 degrees. The pair fought through several punctures, numerous falls, and plenty of aching limbs. 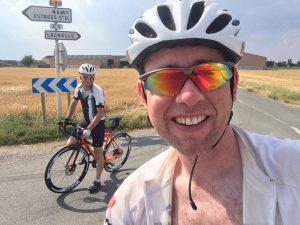 However, it was second time lucky for Dr Llewellyn, who had planned to join a team of six dementia researchers on the charity cycle last summer, but had to withdraw after breaking his wrist when he fell off his bike during training.

Dr Llewellyn said: “The original plan was to cycle from London to Paris last year, though I had a big crash in Wales with just a month to go which put me in A&E. I’d broken my wrist but my back was just bruised and my helmet saved me. I started training again this year and before I knew it I was in London with my colleague Dr Mark Tarrant and we were off!”

The heroic twosome started early from London, with their route passing through the picturesque Kent countryside, and crossing the Channel at Dover. Their journey continued through Northern France along to the Paris finish line at the iconic Eiffel Tower. Their average cycle time was more than six hours, covering approximately 130 km per day.

Dr Tarrant said: “This was a monumental experience and we’re absolutely exhausted. It was incredibly difficult at times but we were spurred on by the huge amount of support and generosity shown by friends, family and colleagues. Thank you so much to all who donated.”

Dr Llewellyn added: “We had to dig unbelievably deep to keep pedalling over endless hours. I couldn’t have pushed myself over 300 miles in the unbelievable heat without Mark’s support and all the people at home donating and spurring us on. Despite the pain, this was one of the best experiences of my life. It was never about us though, we did this to raise awareness of dementia and sorely needed funds for Alzheimer’s Society. I’m back to work today to fight dementia in a different way by conducting research at the University of Exeter Medical School – I think I’ll cycle in!”

The Alzheimer’s Society annual London to Paris ride saw 150 cyclists all riding for the same cause. Their route took them across from the Arc de Triomphe, down the Champs- Élysées and round the Eiffel tower. 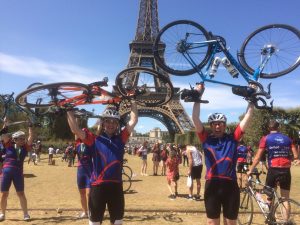 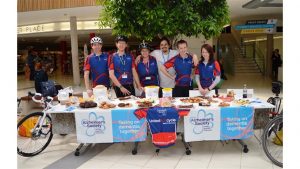 Professor Clive Ballard, Executive Dean and Pro-Vice-Chancellor at the University of Exeter Medical School, who is a world-leading dementia researcher, said: “We are extremely proud of Mark and David. What they’ve accomplished is an exceptional feat, well deserving of recognition, praise and congratulations – particularly in that heat! I’d encourage everyone to support them in raising vital funds for dementia research.”

With someone in the UK developing dementia every three minutes, the need to unite in the fight against dementia has never been more pressing.

Dementia is one of the University of Exeter’s key research focus areas, with outstanding research quality and a growing body of internationally-renowned academics.

The pair have received support from Alzheimer’s Society in recent years for their ground-breaking dementia research.

You can support the pair’s fundraising via Dr Tarrant’s JustGiving page.